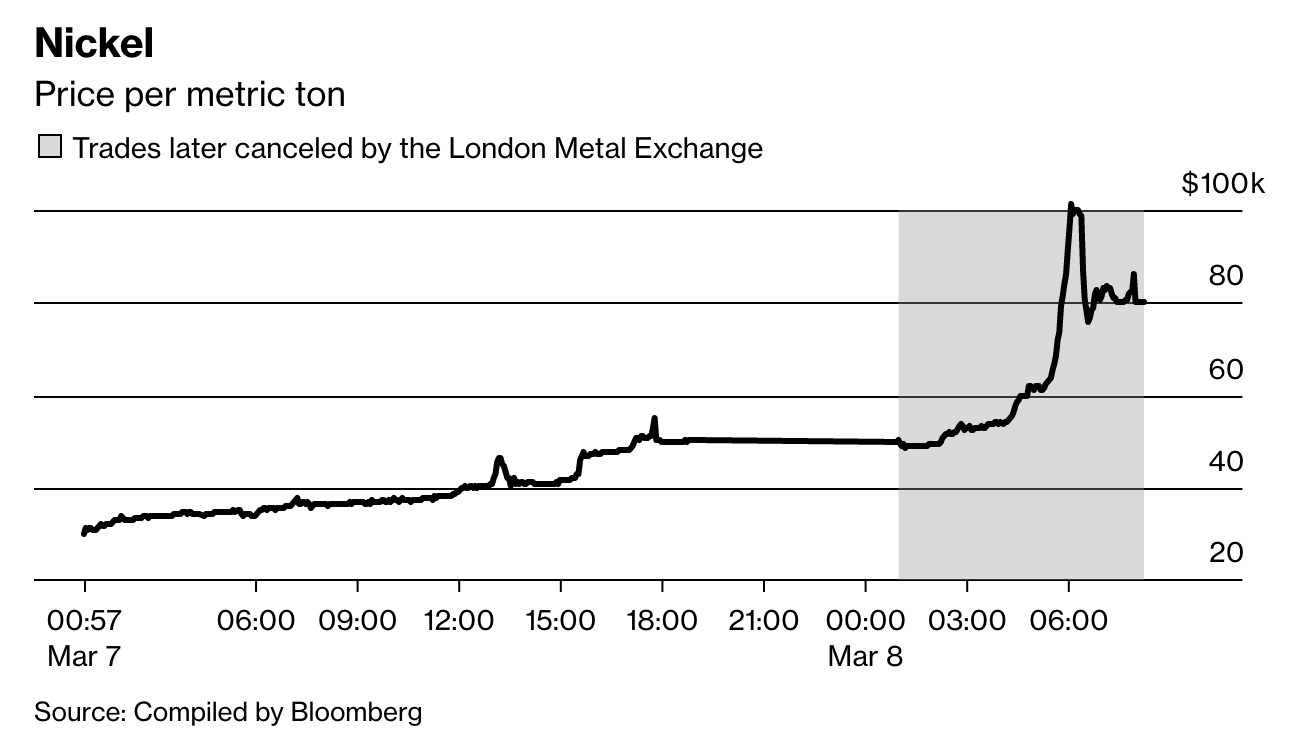 The 18 Minutes of Trading Chaos That Broke the Nickel Market (Bloomberg) [well-researched article worth the price of admission in both time and money]:

Nickel’s 250% price spike in little more than 24 hours plunged the industry into chaos, triggering billions of dollars in losses for traders who bet the wrong way and leading the London Metal Exchange to suspend trading for the first time in three decades. It marked the first major market failure since Russia’s invasion of Ukraine jolted global markets, showing how the removal of one of the world’s largest exporters of resources from the financial system in the space of weeks is having ripple effects across the world.

What caused the price spike? The largest nickel producer in the world, a Chinese company called Tsingshan, was short nickel because it had made a huge capital investment and was set to produce 40% more nickel in 2022 than it had in 2021. In terms of frequency distributions, the cumulative distribution of production was about to expand dramatically in a relatively short period of time. Tsingshan's founder, Xiang Guangda, understanding that the frequency of consumption might not increase fast enough for prices to stay where they had been in 2021, took out a short position large enough to cover the costs of the capital investment in expanding production should nickel prices decline. But what if prices go up? Isn't a short dangerous? Not really if you're short nickel and you're a nickel producer. As nickel prices go up, your short positions turn into losses, but your losses are limited by your ability to deliver nickel to cover the short contract. Your shorts are "covered" rather than "naked," so your losses are limited.

They're limited, that is, so long as you can deliver nickel against the contracts. But what happens if you produce 1 billion tons of nickel a year, hedged your expanded production against a 10% decline from the 2021 price of $20k per ton for a few $100s million, and then watch nickel prices go 250% because Russia, which accounts for about 10% of the world's nickel supply, invades Ukraine and ends up cut-off from global markets? Now closing your short is going to require you to deliver $10s of billions of nickel, and you're going to have to come up with $1s of billions immediately because of margin calls. You don't have that kind of cash on hand, and you can't deliver a huge chunk of your production up immediately against those short contracts: the nickel you are ready to deliver now is already spoken for by customers (with whom you also have contracts) who consume nickel in order to produce things like batteries for electric vehicles.

This is a mess. As I wrote in The Problem of Synchronization:

In this case, Xiang took out the shorts with the intention of keeping production and consumption more tightly coupled. By hedging against a downturn in prices, he was ensuring that Tsingshan's dramatic expansion in production would not result in insolvency. It is important to emphasize that even with the benefit of hindsight, we can say that he was not wrong to do so. Although Tsingshan is in a cash crunch now as a result of the dramatically increased price for nickel, there is no danger of insolvency. Rather, there is only the inconvenience of Tsingshan having to negotiate for short-term financing to meet its margin calls, in effect taking a slightly larger loss on the shorts than it otherwise would have by paying for the privilege of borrowing what it needs to cover its financial contracts until it can deliver against them. But Tsingshan isn't going into insolvency as a result of these trades, it's just going to be less profitable than it would have been if it hadn't hedged its position with these shorts.

But how much less profitable exactly? At some point, the price of nickel could go so high that even the price of short-term borrowing could exceed Tsingshan's entire profits. And at that point, there would be a risk of insolvency. Nobody really wants that though. If Tsingshan goes out of business, the entire market is thrown into chaos, with smaller nickel producers unable to come anywhere close to matching the rate of nickel consumption, and lots of downstream producers of things like electric vehicles, wires, gas turbines being forced to either stop production or raise prices on their customers to cover a dramatic step-wise increase in the costs of nickel. In fact, the only nickel market participants who benefit in that scenario are the financial (i.e., non-nickel producing) buyers who are long nickel, and what they lose is the difference between the price of nickel that would drive Tsingshan into insolvency and the price at which Tsingshan can pay for short-term financing and deliver against its shorts. To be fair, that might be a few $1s billions that these financial buyers would have to give up after watching the prices skyrocket, but even for them isn't it worth giving up some gains in the short run to ensure that you can keep playing the game in the long run? If too much profit from nickel trading goes to financial players rather than operating businesses, the operating businesses tend not to continue operating.

In the event, that is exactly what the London Metal Exchange decided to do. The entire session of trading on March 8 was cancelled, and since trading reopened over a week later after Tsingshan had had the chance to negotiate financing, prices have been allowed only to move up or down no more than 5% or 8% a session. All of these steps were suggested as responses to market instabilities in The Problem of Synchronization:

For some onlookers, including Matt Levine at Money Stuff, these decisions look strange:

The point is that if you are doing all of these quite drastic things it is because you are very confident that the price has gotten very wrong! You have a strong opinion that differs from the market price on the screen, and you are confident that your opinion is right, the market is wrong, and you should override the market. If you have that confidence, it seems strange to reopen trading a week later and say “well, this price is wrong, but we’re going to slowly ease back to the correct price over the course of a week.” Why keep trading at the wrong price? Why not fix the bad dynamics and then let the market find the correct price immediately? You’ve gone to a lot of trouble because you decided that the price was wrong! Just make it right!

On the other hand, it's nice to have financial buyers in a market because they help add liquidity, and cancelling their trades tends to discourage them from participating. Some of those whose trades were cancelled on March 8 will pick up their marbles and go home. Is there an alternative?

In this case, the answer seems to be no. There simply isn't going to be another company capable of stepping into Tsingshan's shoes in the market if they're forced into insolvency by margin calls. But in a market with less concentration, or a market in which the margin calls were made against a smaller player, there is an alternative: Make sure there is plenty of cash available to cover the margin calls through financing, and let the prices swing up and down more rapidly. If the term of the loans is long enough to allow producers to deliver against their out-of-money contracts, but short enough not to otherwise impact the frequency of production, then the financing is stabilizing. This too was observed in The Problem of Synchronization:

Every loan creates its own cycle of borrowing and repayment, which need not be tied to the frequencies of production or consumption. A loan extended to a farmer early in the year, which helps the farmer increase production to meet a deficit that was observed in last year’s season, might be stabilizing. But if too many such loans are extended to too many farmers, then the ultimate effect of the loans may be to create a surplus of production, which in turn leads to the kind of instability described above.

In the case of the London Metal Exchange, producers and consumers of nickel and their financial backers seem to have a clear enough picture of the frequency of production and consumption so that the terms of financing to Tsingshan are unlikely to induce further instability in nickel prices. There may be a few other nickel producers who were also short nickel that are getting financing, but it seems unlikely that the end result of the new financing is going to be a dramatic overexpansion of nickel production in 2023 and beyond. Prices aren't going to be as stable as they had been, but they're going to stay within a range that will allow producers and consumers to make plans over an 18-month time horizon without a material risk of insolvency.

Nonetheless it is worth emphasizing that more readily-available financing is not a panacea. More liquidity simply faciliates more volatility. In some markets, such as the stock market, volatility is accepted, even embraced. In others, such as the energy or wheat markets, volatility might be dangerous. People need energy and food to stay alive. And the energy market, at least, presents another problem. Instead of margin calls being $1s billions, they could be $10s or $100s billions. Those are numbers than no private source of financing can underwite. Already some people, like Matt Levine, have suggested that governments might have to step in to provide financing. I think it's worth asking whether that makes more sense than what the London Metal Exchange has done. Maybe less liquidity and volatility would be okay for commodities on which our lives depend.

There is yet another alternative worth exploring, which was suggested in the excerpt from The Problem of Synchronization about stabilizing responses above: frequency capping, or as it seems more likely to be known in a market like the London Metal Exchange, volume limits. Rather than feeding volatility with more liquidity or starving liquidity with limits on the price range, market makers could limit the volume of trading per unit time, but allow prices to range as far up or down as they can reach within that cap on volume. This alternative might help prices to adjust more rapidly while simultaneously avoiding a decoupling and positive feedback loop. I haven't seen the idea of volume limits per session suggested before, but it would seem to be an improvement on crude price range limits.

This is a personal blog, and the opinions here are not necessarily shared by anybody else, including my employer.

Get the latest posts delivered right to your inbox.

The Years of Lyndon Johnson

Sometimes you hear people say about a person, they’re “doing God’s work” — an important task ... so complex, that only God himself could hope to ever see it accomplished, a task that anybody else would find too daunting to even dare an attempt. Robert Caro is doing God’s work here.…

The Problem of Synchronization

Markets play an important role in synchronizing the cycles of production of goods and services with the cycles of their consumption.…